HAPPY THANKSGIVING! Zander Sod will be closed on Monday, October 8 to celebrate with our families 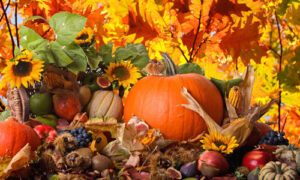 Thanksgiving has been officially celebrated as an annual holiday in Canada since November 6, 1879.

How Canadian Thanksgiving Began… The origins of Canadian Thanksgiving are more closely connected to the traditions of Europe than of the United States.  Long before Europeans settled in North America, festivals of thanks and celebrations of harvest took place in Europe in the month of October.  The very first Thanksgiving celebration in North America took place in 1578 in Canada when Martin Frobisher, an explorer from England in search of the Northwest Passage, wanted to give thanks for his safe arrival to the New World!  That means the first Thanksgiving in Canada was celebrated 43 years before the pilgrims landed in Plymouth, Massachusetts!
For a few hundred years, Thanksgiving was celebrated in either late October or early November, before it was declared a national holiday in 1879.  At that time November 6th was set aside as the official Thanksgiving holiday but after the World Wars it kept falling in the same week as Remembrance Day, November 11.

On January 31, 1957, Canadian Parliament announced that it would be moved to the second Monday in October saying ‘Thanksgiving would be a day of general thanksgiving to almighty God for the bountiful harvest with which Canada has been blessed.’  Since the Canadian Thanksgiving is more about giving thanks for the harvest season than the arrival of pilgrims, it makes sense that our Thanksgiving lines up with the end of harvest in Canada!

Website designed by Intrigue. Additional accessible formats for this information are available upon request. Contact Us for more information.